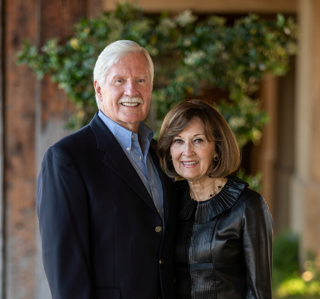 Consent to Contact
I consent to receive marketing content from David Lyng Real Estate and licensed agents within. This includes, but is not limited to, relevant market reports, listing information, newsletters, and event info. Consent can be withdrawn at any time by clicking the "unsubscribe" link contained in any email.

Sharon’s early years were spent in Chillicothe Missouri and later in Dallas Texas.  She attended the University of Texas, in Austin and later received her PhD in Special Education from Texas Woman’s University in Denton, Texas.

Sharon started schools for children with special needs in Bitburg, Germany and Denton, Texas. While living in Dallas she became the Director of the Brittanica Learning Center for children.

Sharon and Neal moved to Tokyo, Japan in 1990 where she served as the Director of Curriculum for Britannica Asia. She also taught English to Japanese business executives.

Upon Sharon’s return to the U.S., she worked for Richard MacDonald Galleries first as an art consultant and later as the Carmel Gallery Director. She was Richard’s top producing consultant for several years.

As previously mentioned, Sharon’s real estate career began with Keller Williams where she spent 3 years.  She later began working with Intero Real Estate Services and worked there for 13 years. Sharon excels in working with the upper end market, and this is the reason they have elected to call themselves the SMITH PRESTIGE PROPERTIES TEAM.

Neal was raised on a cattle ranch in Montana. He attended Eastern Montana College with a scholarship in track and received his degree in Business Administration and a minor in art.

After college Neal worked for IBM in Billings, Montana as a salesman and later in Anchorage, Alaska during the Alyeska Pipeline era. Later Neal and 2 other IBMers were recruited by North American Philips to develop their sales training school in Dallas. Neal was soon promoted to Area Director in Los Angeles. After 18 months in LA Wang Labs recruited Neal to run their Dallas operations. The Dallas office became the Number 1 Wang office in the U.S. under Neal’s direction.

Dick Bass, a friend of Neals and the owner of Snowbird Ski & Summer Resort, recruited Neal as a marketing Consultant and later promoted him to Senior Vice President. Neal was asked to promote Snowbird in Japan and was successful in making Snowbird the number one destination in the US for Japanese skiers.

A large Japanese conglomerate, the Saison Group, approached Neal to see if he could assist them in entering the golf industry in the US. Neal contacted Robert Dedman, the founder of Club Corporation of America (CLUBCORP) the largest owner and operator of private country clubs in the world. He was able to form a joint venture with the two companies and was then asked to become the President of the new venture called Private Clubs International. Neal travelled extensively throughout Asia developing golf courses and private businessmen’s clubs in cities like Beijing, Jakarta, Singapore and Tokyo. Sharon and Neal lived in Japan for 3 years prior to returning to the US and moved to Pebble Beach in 1993. They have been on the Monterey Peninsula since that time and have lived at Pasadera since 2003 and have been golf members since 1999.

Neal became involved in the formation of several technology companies and was CEO until January of 2022 when Neal left the technology world to work with his wife Sharon in the real estate business. Together they formed Smith Prestige Properties Team under the brokerage of David Lyng Real Estate.

Thank you for your inquiry.